It is the spring of 1884.  America's west coast is slowly being populated with small towns full of settlers, come to prospect for precious metals, set up ranches and run dubious saloons - and now the railroad is coming!

Cactus Gulch is one such small town, founded 20 years ago and tonight is has a festive air as the townsfolk get set to start their 20th anniversary celebrations.  However, all is not running smoothly.  Land disputes, disreputable card games, strange folk from out of town and hostile Indians all add to the tense atmosphere.  Join us in the Silver Dollar saloon as celebrations begin and find out how the evening unfolds ...

Once the invitations were sent out and my costume was sorted the next two steps were the food and decorations.  I had so many ideas but had to rein them in to affordable options! LOL  I saw an e-card the other day which said "An evil witch cursed me at birth with expensive taste and no money!".  While I don't go to quite that extreme, my mind does kinda go wild ... as in beyond my abilities and budget :)

I mentioned yesterday that I found some great on-line image resources.  My favourite was the digital collections at Duke University.  They have collections of sheet music, women's lib stuff, and many more.  Their online advertising collection is wonderful!  This one was particularly funny ...

We are sure that the fact that it was "illustrated by models, especially of the feminine structure" would have reeled them in!  We all had a giggle at this one.

I printed off lots of vintage adds and used them in my decorating.  Free Form Games recommend that you have a large room for the guests to mingle in with another area/room for more private conversations.  We used our games room as the Saloon and then we turned our living room into a General Store/Mercantile.

We had a huge piece of calico that we used to cover our store at shows/fairs and we used this to hide the TV and create a backdrop.  I then created a buffet area using some plastic gingham table clothes that were on sale for a couple bucks.  Everything else came out of my stash or off the printer.

Here is the Mercantile we created.  Lots of food and medicine related advertisements here.

I printed off old medicine labels and stuck them to jars and pots.  Then I filled them with flour and coloured water.

Yes, the next add does mention cocaine.  I wonder what the babies thought????  I bet it made the toothache go away! 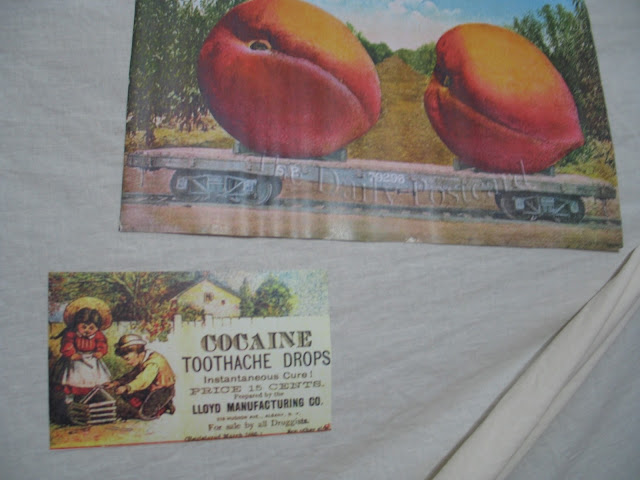 The Princess made these cupcakes.  They were her contribution to the night.  As we were making the cakes our power went out!  We have a gas oven so we could still cook but it took The Princess an hour to hand mix these ... you could say they were authentic!

And a few more adds in the Mercantile ...

Next up was the Saloon.  With the power out I couldn't cut out the lettering!  Thankfully it came back on and I quickly cut everything as it had been forecast to still be out at 7:30pm.  We almost had a REALLY authentic wild west night!

We printed off old reward posters to decorate the Saloon, along with more 'manly' adverts.

We decorated the bar with peanuts and chips/crisps.  Everyone brought their own drinks and we put them all in the bar.  Our junior bartenders helped to serve them (just don't tell anyone!)

Now that everything is ready we are good to go ... Lets the party begin!

I tried to put a rinse in my hair to make it black but even after two bottles it was only a dark brown.  The next morning however it was almost black ... note to self - dye hair the day before! (and it is still washing out LOL)

Here are our three 'Assistant Bartenders'.  The boys were supposed to be on camp but it was cancelled and as they were all home they were roped in to help.  The host for this game was the Bartender (The LOML) and he was responsible for the running of the game.  As he also had to see to serving the food and pouring drinks he needed some assistants.  The kids were only too happy to join in as they knew the food would be worth it :)  They helped reheat the food, pour drinks, and clean up.  They were terrific helpers.

We're ready.  Where are all the guests???

Everyone soon arrived and the fun began.  I can't really show you all the individual photos without everyone's permission, but everyone got into the spirit of it and dressed up.  We had more male than female roles but had more females than males ... did you follow that?  So we had some cross dressers, complete with beards and/or mustaches.  The host really does have lots to organise so if you are going to have a murder mystery night with friends I suggest you either have someone cater, have two hosts, or have some helpers like we did.

We forgot to take photos of the food but here we all are lining up to eat!  We didn't have anything traditionally 'wild west' as we cooked the main with meat from the freezer.  We had choice of slow cooked beef vindaloo and/or chicken tarragon, served with green beans & bacon, and our yummy sweet potato crunch.  I did once promise you the recipe when I got a photo, but as we forgot the photo again, I wont torture you any longer.  It really is yummy!

Mix above ingredients until creamy, put in heatproof dish.

The first time I tasted this I was only little.  My Grandma always rounded up stray American's for Thanksgiving and they usually brought something.  This was made by two spinster sisters (The Boots) and it became a firm family favourite.  Like most American recipes from that era it was very sweet.  When it became my responsibility to make this I lowered the sugar to 3/4 cup and then kept lowering it until it became only 1/4 cup.  That small amount of sugar really does make it seem like a treat (especially if you don't have access to local sweet potatoes), and as we don't have it too often I tend to put it in.  But as there is also sugar in the topping it really doesn't need it if you are going to eat it more often.  We very rarely ever have leftovers when we serve this unless I make extra.

For dessert I really couldn't decide.  I wanted all my favourites but had to narrow it down to only three, while keeping everyone happy.  I would have added a German Chocolate cake and pumpkin pie (I considered pumpkin and pecan pie too).  But in the end I went with my absolute all time favourite ... banana cream pie (NO meringue).  And added in angel food cake with cream and strawberries, and key lime pie with meringue.

I was waiting to make the angel food cake when the power went off.  Let's just say that The Thinker was happy to have the power come back :)  He was whisking egg whites like his life depended on it!  Thankfully I made the pies the day before.

It was a fabulous night and I won't spoil the story for you in case you decide to give the game a try.  We laughed so hard my cheeks hurt the next day.  The game is very flexible and it involved double dealing, blackmail, more murders, and in the end we were all so caught up in our own deals that only the murderer knew 'who done it'.  It was like an episode of Taggart, Midsummer Murders, Inspector Morse, and Lewis all rolled into one!

It was a fabulous way to spend a birthday with a group of wonderful friends.

See you on Sunday for Storytelling Sunday.  I also hope to catch up on my blog reading this weekend and should be dropping by.

Chipper
Posted by Unknown at 21:00

Thanks for taking the time to brighten my day :-)
Due to spam I have had to stop comments from Anonymous users. I apologise if this causes you any difficulty.